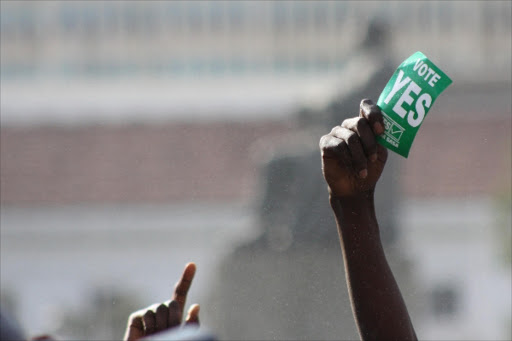 Kenyans are now awaiting (some eagerly, some with trepidation) the final recommendations of the BBI team. There is a lot of talk of a referendum. But, before the people have their say, the politicians have theirs.

What do Kenyan politicians do when they get their hands on a constitution?

The 2001-04 process involved massive civic education, consultation with the people, with a local coordinator in each district to explain the process and organise meetings for the people’s feedback.

Its draft went to the National Constitution Conference, with one third district representatives, one third MPs and one third civil society, which sat for a year and produced the ‘Bomas Draft’. This proposed a parliamentary system with a largely ceremonial President with some, but limited powers. “No whiff of two centres of power,” Yash Ghai commented in 2005.

The document was then hijacked by government. First, it went to a Parliamentary Select Committee (including Uhuru Kenyatta, Raila Odinga and William Ruto with 19 others) which shifted to a semi-presidential system.

Changes went further in the ‘Wako Draft’” (named for the then Attorney-General). True, a few bits gave powers to the AG, but basically it was a politicians’ document.

There were two main areas of difference between the Bomas Draft and what the current authors called the Referendum Draft of 2005.

The latter shifted to a presidential system. There would have been a Prime Minister, but Yash Ghai commented, “The office of the Prime Minister is unlikely to amount to much. The Prime Minister is little more than the Leader of Government Business and acts always on the orders of the President. He or she has no role in the appointment or dismissal of ministers; nor in the allocation of portfolios or ministerial responsibilities.”

All this suited Mwai Kibaki, who, having waxed eloquent on the evils of the imperial presidency when he was not president, changed his tune once he was – and by 2005 hoped for a second term, having originally claimed he wanted only one.  And the Referendum Draft made it almost impossible to remove a president: impeachment required support of 75 per cent of all the members of Parliament (even if the committee investigating allegations against the President found them justified).

The other major changes were about devolution. The Referendum Draft version was much weakened. Districts (what we now call counties) would have had no guaranteed powers at all, as everything was subject to law, easily made by Parliament. And that Draft had no Senate to protect the interests of counties. The draft abandoned the idea of an intermediate level of government between district and national (which Raila now wants to revive).

Voters rejected this draft in 2005. For some the issue was the constitution. For many the referendum was a chance to express their support or otherwise of the government. Ninety-two  per cent of voters in Central Province voted Yes; 12 per cent voted Yes in Nyanza.

The Second Draft Constitution by the Committee of Experts (CoE) went – as the law required – to a Parliamentary Select Committee in 2010. This comprised 26 senior politicians, including Uhuru, Ruto, Isaac Rutto, Martha Karua, James Orengo, Musalia Mudavadi and Charity Ngilu. Regular Katiba Corner readers may have noted how often we discover that some problem originated with that committee, and its negotiations with the parties.

The committee proposed many changes. To be fair, a few were sensible. The CoE accepted about half of them – mostly because they were on politically sensitive issues (read – what politicians wanted). The CoE were afraid that, if they irritated the politicians too much, the draft would be rejected in Parliament.

They would have made human rights binding only on the state and not on others –like companies or even individuals. The CoE did not accept any of these – though it did some other changes about rights. The PSC would also have removed the provision about public participation in the work of Parliament. Another regrettable provision was the abolition of the office of public defender, to provide lawyers for the citizen — a change which the CoE did not resist.

Some of their proposals related to accountability and integrity. They would have removed the right to fair administrative action. Article 40 is about the right to property but it says that the right does not apply to land unlawfully acquired; the PSC wanted to add “after due process of law” – probably meaning after a court case – to this. They did not want various provisions trying to prevent corruption, such as requiring declarations of wealth, and banning foreign bank accounts. They would have removed any reference to an anti-corruption commission. The CoE removed the declaration of wealth provision, but not the others.

Of course, the really big change was from a parliamentary system to presidential. It has always been hard to see this as principled rather than motivated by particular, even personal, ambitions. Now some people want to change it – but perhaps only to something like the Referendum or Wako draft.

Related proposals included giving the President the power to appoint the Inspector General of Police, and having a role in the choice of the Chief Justice. The CoE adopted the first but not the second.

The MPs introduced a specific number of national constituencies – 290. And they did away with the guarantee of two-thirds women.

One of the pettiest things was to call the Senate the “lower house of Parliament” – the CoE did not accept it.

On devolution – some PSC suggestions actually strengthened it. They introduced the 15 per cent minimum for the counties’ ‘equitable sh’” of national revenue, and the Equalisation Fund to try to bring up the counties with marginalised communities.

On the other hand, they would have done away with the Commission on Revenue Allocation, and made the Senate just an advisory body to the National Assembly on the question of how much revenue was to go to the counties.

Interestingly, they also tried to do away with the procedure that the CoE had developed to try to compel Parliament to pass laws needed to implement the Constitution.

You will probably realise that the CoE did not accept this, and left their own scheme under which anyone can petition the Chief Justice, and ultimately Parliament might have to be dissolved and a general election called because Parliament had failed to pass necessary law.

It has worked quite well to push the MPs to pass laws – though not always with the best results for the quality of those laws. It has been a failure where the two-thirds rule is concerned.

Since the Constitution was adopted, MPs have several times moved amendments. There have been efforts to change it so that MPS are no longer ‘state officers’ – which could have freed them from various burdens as they see it – including having their salaries fixed by SRC. Some proposals on the two-thirds gender rule would have pushed its realisation into the future, while others have never got anywhere – MPs just don’t turn up.

Can you trust politicians with the Constitution? The people played a major role in making it, and many politicians never liked it. And, when they had the chance, they changed it, often to suit themselves.