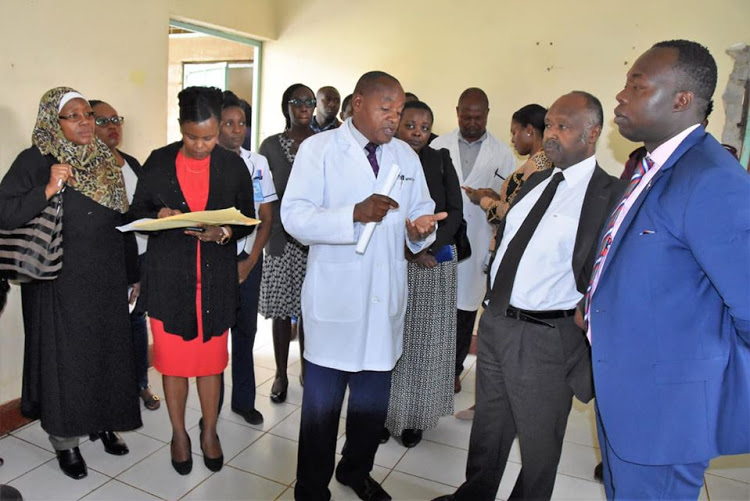 Last Saturday was International Mental Health Day. Our media did carry some items, including about a Human Rights Watch report showing how common it is around the world, not just in Kenya, for people with mental illness to be restrained, even chained, including within their family homes.

And it was good to see Health Cabinet Secretary Mutahi Kagwe write about the Mental Health Task Force report – and add “which we are committed to gradually implement”.

This report is a good document grounded in the Constitution. As it points out, the Constitution recognises the rights of everyone to their dignity, to equality, and to the highest attainable standard of health (which, the task force rightly comments, must include mental health).

The specific rights of persons with disability (especially not to be addressed insultingly), of youth and the elderly, including to participate in all aspects of life, are also very relevant. The report repeatedly comments that laws are not implemented, and those that exist are often not in line with the Constitution.

Much of the information is not new. As the report says, the Kenya National Commission on Human Rights in 2011 and the Auditor General in 2017 have previously graphically documented the situation.

That Mathari Mental Hospital, once a leading institution, is in a terrible condition is not news – though it was right to spell it out: “The physical facilities in some sections of Mathari Referral Hospital as well as Port Reitz Hospital in Mombasa are the source of great shame to all Kenyans.

No citizen of our country should live in those dehumanising conditions. Beyond being unhygienic and lacking the most basic items like toilets, Kenyans are housed in unsafe buildings that would be condemned as unfit for human habitation, if inspected by Public Health Authorities.”

WHERE IS THE WILL?

Unfortunately, the shame does not seem to be sufficiently felt by those in a position to take action. The big challenge for a body such as the task force is: What can they contribute to the development of that mysterious quality — the ‘political will’” — to get done what everyone knows must be done? Indeed, is the appointment of task forces a way of doing something, or a way of trying look as though you are doing something?

It seems a little odd to have the task force report less than half-way through the Life of the Mental Health Policy 2015-30. Perhaps, at least, it may contribute to the Action Plan that is promised.

Will it have any impact? Of course, its publication was blighted by the coronavirus: People’s attention has been focused on another disease. And if money has been short for mental illness, and other medical services, for a long time, how much worse must things be in a virus-induced financial disaster?

One’s heart sinks a bit on reading the sensible suggestions. Rebuild Mathari (of course – CS are you committed to this?); support services including in private employment places; education and awareness building, in schools; special programmes for vulnerable populations such as prisoners, refugees and displaced persons, LGBTI communities and so on; have mental health services closer to the people. Lots of good ideas – but many of them have surely been obvious, if not in detail, for many years….but!

Some things could be done without any expenditure of money – one is to decriminalise attempts to commit suicide. It should have been done long ago.

Decriminalising use of drugs (not dealing) would be much harder to get through Parliament – and the nation. One country that has achieved a lot through doing this is Portugal – fewer drug overdoses and HIV infections, and less drug-related crime. It can reduce stigma and thus, reluctance to seek help, but it needs resources so there is help to give.

Some other legal changes proposed by the task force are even more controversial. They propose a Mental Health and Happiness Commission. While mental ill health is an important source of unhappiness, it is surely not the only one.

Mindless political violence, domestic violence, poor education, unemployment, and a sense of hopelessness are major contributors to mental ill-health. In early 2003, Kenyan were the happiest people in the world. Why? Because they thought things were going to change. They had hope.

The last thing we need – I would suggest – is yet another body of people with a bureaucracy and cars and allowances, and another tedious and self-serving annual report by the President, in addition to the one he already gives on National Values and Principles, which public servants toil over for months and hardly anybody reads.

Another dubious idea is declaring a National Emergency on Mental Health. Yes,we have a situation of urgency (as we do on a good dozen other issues) but declaring a state of emergency does nothing. True, Moi declared one on HIV in 1999. Years later, people were calling for it to be gazetted – believing that this was essential for HIV drugs to be zero-rated for tax – which was nonsense.

Around the world prison systems are chock-a-block with people with mental illnesses. The task force is quite right that this is a serious problem. It said that 40 per cent of hospital inpatients have mental illnesses – how much higher must the percentage of the prison population be?

The English Director of Public Prosecutions has said, “Almost one in five of our cases involved a victim, witness or defendant with a mental health condition.’

Most people in Kenyan prisons get no treatment. Short sentences are useless — particularly for people whose fundamental problem is a mental illness not criminality in any real sense of the word. And the presence of people for whom prison is the wrong place anyway makes it harder for any rehabilitation to take place for those who might benefit.

This is a matter on which we really need a task force. Recent tendencies have been for lawmakers to increase sentences. Lawmakers, the Judiciary, prison and probation services and society need to take this problem very seriously.

The idea of a special magistrates’ court with mental health expert assistance I was not convinced about. We have 116 magistratea court stations around the country, and 99 per cent of criminal cases are dealt with by them. And they all have before them many people with mental illness.

One of our major legal problems is the ‘Guilty but insane’ verdict. This is what happens to someone who has done something that is a criminal act, but was not responsible because their behaviour was influenced by a mental illness. The verdict was changed in the UK in the 1840s from the more logical ‘Not Guilty on the grounds of insanity’” because of a case with political angles. It was eventually changed back again.

In Kenya, we still have the 1840s verdict. A person can be found not responsible for their actions because of their mental illness, but still ‘Guilty’. The law says the matter must be referred to the President for a decision as to the fate of the person found guilty.

Some Kenyan judges have found this unconstitutional. A judge might now commit to Mathari a person found ‘Guilty but insane’ for a fixed period – but the court must review this periodically. Another sends a convicted person to prison – despite their not having been really responsible for any crime – hoping that the Ministry of Health and the prison authorities will sort out the correct treatment.

Clearly the situation is a terrible mess, with judges making decisions they are not best qualified for. No doubt the task force steered clear of it because there is Committee on Criminal Justice also sitting. A serious consideration of the law is desperately required.

Overall, serious action on mental health is required – and not ‘gradually. We have already delayed long enough.

This article (including the image) was first published by the Star Newspaper www.the-star.co.ke