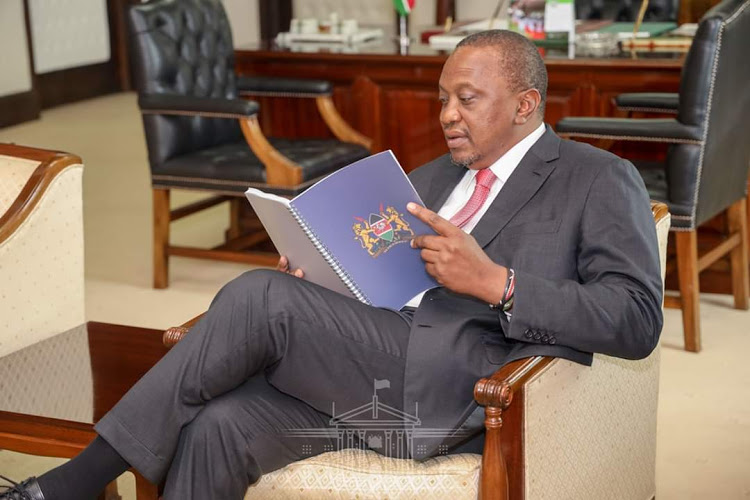 We are promised (or threatened with) the revised BBI report to be launched soon. One can’t help wondering what is holding it up.

People disappearing overseas to prevent it from happening? Is someone making last-minute changes? Is there disagreement behind the scenes – and, if so, among the BBI steering committee or between the handshakers?

Raila Odinga says he is now meeting the people and explaining his objectives. But why before we can see the report?

Eventually, it will happen. Maybe we can expect one of Gado’s “Moses coming down from the mountain” cartoons – though who will be the bearded prophet clutching the cracked stone tablets? Or maybe there will be two of them? (Though Uhuru Kenyatta rarely speaks about this process).

If it gets to the point of being implemented — and involves changing the Constitution to any major extent — Kenyan voters will be asked to vote on it.

But there is a serious risk that Kenyans decide how to vote in the same way as they usually do: “If ‘our leader’ is for it, we cannot be against it.”.

What a tragedy if the future of the country is decided on the basis, not of logic, but of which politician was in bed with which other politicians when the referendum took place, that Tangatanga and Kieleweke should dictate how the sovereignty of the people – your sovereignty – is exercised.

If Kenyans take their civic responsibilities seriously, they should try to understand what the final report is recommending, especially what aspects will require their votes in a referendum, and whether they are a good idea or not.

WHAT WILL THE QUESTION BE?

In 2005, you might have thought the question was “Do you approve of the Government of President Kibaki” or even “Do you come from Central Province?”

People who would have answered Yes to both those questions generally voted “Yes” (Banana) for the Constitution that was a mutilated version of the Bomas draft. The rest voted “No” (Orange).

And in 2010, the voting was less clearly divided – but many people voted “No.” Not because they disapproved of the whole new proposed Constitution because they — or some ‘leader, political or religious — said they should, or because of something about land, abortion, gays or Kadhi courts – completely ignoring issues about how the country should be governed, about transparency, human rights, justice, public participation and accountability.

There was a proposal to change the question to be asked in 2010 to, “Do you want the existing constitution or the proposed constitution?” and have the chance to tick the relevant box as in an election.

But the electoral commission of the time insisted – and the law supported it – that the question should simply ask “Yes or No?”

WHAT WILL THE REAL QUESTION BE?

There was a lot of stuff in the first BBI report that was hardly discussed, and the purpose of which was unclear. Some looked quite appealing.

Many of those suggestions were simply saying “Let’s do what the Constitution (or even morality) says we should do.”You won’t be asked to vote about those. And it would not make any difference if you could.

These are things we elect and pay, government to do anyway (and they don’t). Why they felt the need to outsource this to a bunch of people not in government (though some had been in the past) is unclear.

The media are probably right that the real issue (especially for the Handshakers – and for William Ruto) is more jobs for the heads of large communities — so we’ll have the President, the deputy, the prime minister, and two deputy PMs.

There has much discussion about this, including in this column.

When thinking about it, voters ought obviously to think about who will benefit: The nation, certain communities, certain individuals?

But will it achieve anything concrete? Who will it exclude as well as who will it include? Is it about a better, more accountable and more effective government into the future or is it really about 2022?

In round one, there were certain proposals that seemed to be there to bring in voting support for the ‘real’ issue. A notable example was a minimum of 35 per cent of revenue for the counties (as opposed to the minimum 15 per cent now).

Governors have said, “We won’t vote for it unless it gives more money to the counties.” What is this money for? Have the counties managed their money so well that they need and can manage more – without more functions being given to them?

Others may be added. Has the Chief Justice with his ‘advice’ to the President given a push to the idea that the Constitution should be amended to achieve the “not more than two-thirds of either gender rule” in Parliament?

And could this be done through the BBI – although this would mean not strictly following the logic of the Constitution and the ‘advice’?

This would mean that some sort of ‘deal’ was reached between the President and MPs – not to dissolve them provided they ‘fix’ the gender issue.

There are signs that some women’s groups are pushing for this. If it is accepted by the BBI sponsors (President Kenyatta and Raila) it may be to get support for the core BBI (namely the jobs for the five big communities).

This process may continue – each additional possible change to the Constitution bringing onboard support for the core.

Some ideas with support in or around government may be included in the hope they will sail through, not necessarily focused on, in the wake of the issues that people are focusing on.

In round one, there was changing the status of Nairobi, which the President has since been trying to change in a probably unconstitutional way. And there was the idea of changing the IEBC from a supposedly independent institution to one nominated by the parties.

WHAT TO WATCH FOR

This is why Kenyans should not just focus on something good that they think is proposed by the BBI, or something bad that they want to reject.

All Kenyans who are considering how to vote in a referendum – or whether they want to support the BBI in other ways – should ask themselves:

If I vote ‘Yes’  because I like this idea, am I going to accept something else that I actually think is a bad idea?

If I vote ‘No’ because I don’t like a particular idea, am I going to lose something I think is a good idea?

If I say ‘No’ to a good idea, is there some other way to achieve the same result without changing the Constitution, so the good idea is not lost forever?

Am I tempted to vote a certain way not because I understand the issue but because ‘my leader’ says I should? Is this a good enough reason?

If I like a particular idea, how will other Kenyans react? Is it really in the national interest?

It may be helpful to think in advance, ‘What is really important to me about the Constitution?’

It could be devolution, an independent Judiciary, the environment, public participation, the rights of women.

This may help you to avoid being beguiled into supporting the sweeping away of something that matters, by some ill-thought-through and temporary enthusiasm, or misleading analysis, even a tweet.

The Constitution we have was the result of 30 years of thought, discussion, consultation, and participation.

It involved all groups in the country and a huge majority voted for it — except for certain elites. Often when we find there is a problem or uncertainty in the Constitution, it is because changes were made in a rush without proper thought>

Despite the enormous sums of money spent on it, how rational a decision making process is going on this time?

This article (including the image) was first published by the Star Newspaper on 10 October 2020 www.the-star.co.ke