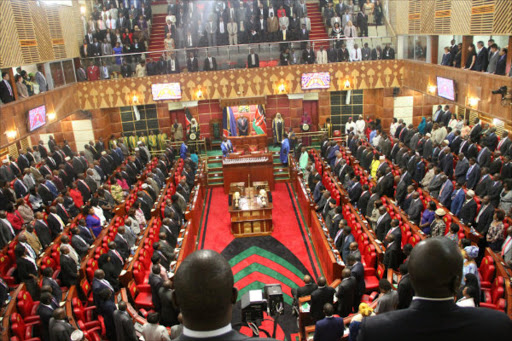 The fifth session of the 12th Parliament, which commenced last week, coincides with three main defining events and developments that, depending on how they are managed, shape the country’s future political, economic and social trajectory.

First, the Covid-19 pandemic remains a constant item in our news.

Though it is no longer an obvious headline, it remains a permanent item in the news bulletins, as discourse progressively shifts toward the acquisition of vaccines.

Second, the push to amend the Constitution under the Building Bridges Initiative appears to be back on track.

Slowed down by the pandemic last year, advocates appear determined to make up for the lost time.

The Constitution of Kenya (Amendment) Bill, 2020 has been tabled before the 47 county assemblies for consideration as provided for in the law, while in the National Assembly the Referendum Bill, 2020, has gone through the second reading.

Third, the 2022 succession politics are already heating up.

Intensified political activities signify a full-blown process, with politicians throwing caution to the wind. Not even the conceivable existential threat posed by the pandemic appears to neutralise the pace.

PLACE OF THE PUBLIC

Successful management of these developments necessitates a heavy involvement of a variety of stakeholders, actors and duty bearers, including Parliament, which is constitutionally charged with representation, oversight and legislation.

Parliament acts on behalf of the public, whom it is bindingly mandated to represent. This does not mean it just replaces the public.

In fact, structured engagement with the public is envisioned, and the Constitution specifically demands it in Article 118.

Further, it is rightly assumed that the public’s delegation of its sovereign power to Parliament (Article 1(3)) does not in any way confer a monopoly of control and knowledge on it.

At times, the public would need to present to Parliament matters that may not have come to its attention. A number of tools have been provided to ensure members of the public are still able to directly air matters of concern to them. One such tool is the right to petition Parliament.

The National Assembly Standing Orders define a petition as ‘a written prayer to the House (National Assembly)… by a member of the public requesting the House to consider any matter within its authority … including enacting, amending or repealing any legislation.’

The centrality of the petition and its utility to members of the public is acknowledged by the fact that it is grounded in the Constitution. Article 37 provides that ‘(E)very person has the right, peaceably and unarmed…to present petitions to public authorities.’

Specifically on Parliament, Article 119 (1) provides that ‘(E)very person has a right to petition Parliament to consider any matter within its authority, including to enact, amend or repeal any legislation.’

Parliament must ‘make provision for the procedure for the exercise’ of right to petition (Article 119 (2)). Parliament has duly complied via the Petition to Parliament (Procedure) Act, 2012, and its Standing Orders.

Parliament has a standardized formal petition template, which any member of the public intending to petition must use.

It is a fairly simple and straightforward template that would readily encourage prospective petitioner(s) to launch their petition. The petition must be in English or Kiswahili.

Once prepared, the petition goes through a series of steps that are deliberately configured to safeguard the integrity of the process.

Upon receipt, the Clerk is responsible for checking that the petition fully complies with the Parliamentary standards and the law.

This is done within seven days of receipt. Verification of compliance paves the way for scheduling of the petition in the Order Paper, an official record that captures the business to be transacted by Parliament on a particular day.

Whereas Parliament has put in place these robust institutional and legal frameworks to facilitate public petitions, the process is not without challenges.

To start with, its very nature requires a degree of literacy to ensure that it is compliantly prepared.

It is thus exclusionary and elitist to the extent that it excludes a good majority of illiterate Kenyans.

Second, even for the literate, it requires a deal of investment to ensure that it is finally attended to by Parliament.

The provision requiring that the petitioner ascertains that the issue raised must not be under consideration by any other legal entity is one that might conceivably lock out potential petitioners.

Successful clearance of the requirement calls for more than just literacy; it calls for a certain degree of professional grounding and passion.

Third, Parliament is an institution traditionally lacking in public trust and confidence.

This trust deficit may discourage the public from using the petition procedure.

Further, the public might be reluctant to use petitions because they view Parliament as an emasculated institution, left with little freedom of action by an overbearing Executive.

Fourth, petitions face time constraints that may impair the effectiveness of the response.

In the House, the presenter is allowed at most five minutes, and deliberation on it is capped at thirty minutes.

Additionally, the limitation of language to Kiswahili and English naturally locks out persons with a disability unable to express themselves using the two languages.

The time taken to conclusively consider petitions is a real challenge.

A good example is a petition presented to the Senate on November 13, 2019, regarding the delayed opening of Njiru Secondary School in Kasarani, Nairobi.

On February 11, 2021, Senator Joyce Milgo raised concern noting that the ‘Petition has over-stayed’.

Moreover, the ‘centralization’ of Parliament in Nairobi disincentivizes broad national use of the tool.

HOPE FOR THE FUTURE

There is hope, however, if Parliament takes the petition procedure seriously.

To start with, Parliament could establish staffed outreach posts to assist persons who have issues but are not best empowered to engage with the tool.

Second, it would be a great idea for Parliament to shoulder the responsibility of ascertaining whether the issue is under consideration by another legal entity.

And to tackle the apathy arising from the deficit of trust, Parliament should intensify its awareness campaign, informing the public on achievements registered from presented petitions.

Civil society organisations such as Mzalendo Trust would be good partners in carrying out these awareness campaigns, including sensitising the public on the benefits and use of petitions.

In addition, Parliament may consider amending its Standing Orders to allow more time for consideration of petitions.

Definite timelines for conclusive consideration of petitions should also be provided.

Serious consideration should also be given to the incorporation of sign language to take care of individuals with hearing and visual impairment.

It is an idea that could trigger increased use of the tool by the people at the Mashinani.

Intensified use of online platforms would naturally come in handy, particularly in the context of Covid-19 pandemic, when the traditional avenues have been greatly disrupted, if not completely grounded.

Enhancing public awareness and knowledge on the use of petitions would make them a powerful platform to enhance citizen voices in the legislative agenda.

It’s an opportunity that the legislative units at national and county levels, together with actors in the civil society space must seize and make a reality.

Only then can citizens harness this power. The legislatures would rise in the public estimation also.

This article was first published by the Star Newspaper https://www.the-star.co.ke/