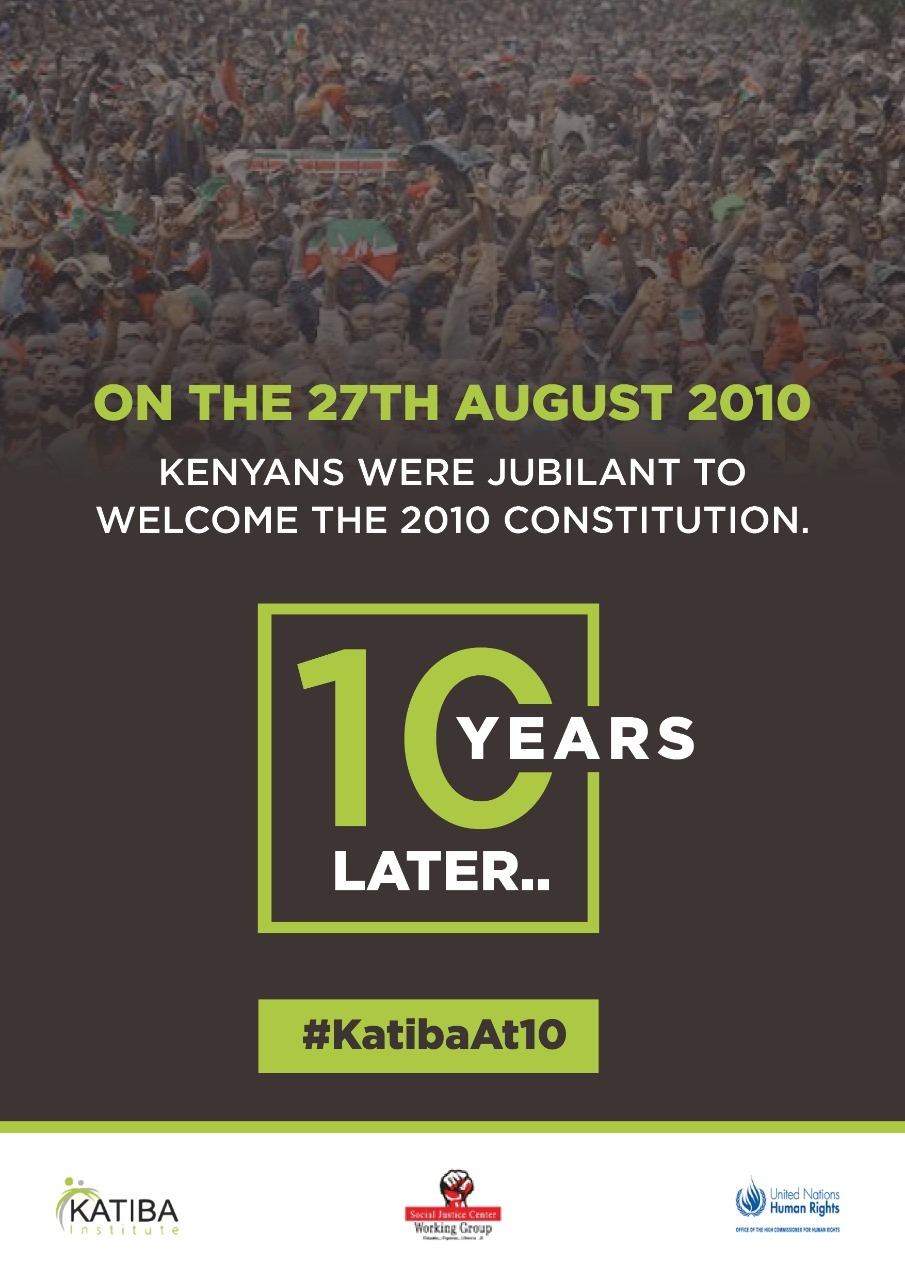 Ten (10) years ago, Kenyans voted overwhelmingly for the adoption of the 2010 Constitution which, it was hoped, heralded the beginning of a new era for democratic values, good governance, rule of law and social inclusion for all. The 2010 Constitution was hailed as the “People’s Constitution” and was considered a reflection of the will of the people mainly owing to the process of making it, which was people driven and captured the aspirations of the many Kenyans who participated in the process.

The 2010 Constitution further brought about major gains that altered Kenya’s socio-economic and political landscape in a manner which set up a new stage for democracy in Kenya as it put an emphasis on the sovereignty of the people and  incorporated a comprehensive and expansive bill of Rights encompassing; socio-economic and cultural rights, civil and political rights, and environmental rights. The incorporation of a bill of rights for the people of Kenya was intended to protect the rights of the people against infringement by the state and private citizens as it guaranteed the citizens basic human rights. It also gave Kenyans the power to protect its provisions by allowing citizens to challenge violations of any right or fundamental freedom enshrined in it in a court of law.

10 years on, however, there are many questions that still linger in the minds of most Kenyans with regards to the bill of rights and its implementation and if it has lived up to its expectations. A key concern being whether the bill of rights has been given serious consideration by the political class in terms of implementation and if at all it has protected the rights of the people- including the marginalized. The 2010 Constitution had envisioned a Kenya whereby power lies in the hands of the citizenry and the fundamental freedoms are freely exercised albeit with limitations on some, but this has not been the case. The bill of rights has faced challenges when it comes to its implementation which include; a citizenry that has been unable to hold the government accountable for breaching the requirements of the bill of rights; limited civic awareness whereby majority of Kenyans are yet to understand the provisions of the bill of rights; state capture, intimidation on the citizenry and interference with institutions tasked with oversight and enhancing democracy and human rights.  Many issues have come about in the 10 years that the constitution has been in effect and studies have shown that the 2010 constitution has failed to fully deliver on the bill of rights and the transformations that many Kenyans had hoped for.

A constitutional audit undertaken by Katiba Institute in 2019 established that while the constitution has been doing well in some areas, there are some aspects that have not been adequately implemented. The Katiba Institute Constitutional audit paints a picture of how the government has deliberately subverted the national values and principles enshrined in the 2010 constitution and its failure to prioritize the enforcement of the bill of rights and its incorporation into national policies, specifically, economic and social rights such as the right to quality healthcare, housing, sanitation, education, cultural rights and environmental rights that guarantee the right to a clean and healthy environment. Other issues highlighted in the audit in relation to the bill of rights include; failure by the government to operationalize effective mechanisms to support public participation and access to information; non-compliance with gender equality provisions; failure to adopt police reforms which has further strained police-community relations; control of media freedom; violations of the right to peaceful assembly;  and the infringement of political rights through electoral lawlessness. These revelations are but a clear indication that a lot still must be done to ensure the enforcement and full implementation of the 2010 constitution.

With the 10th anniversary of the 2010 Constitution coming up, the status of its implementation is something that Kenyans ought to pay attention to even as they commemorate the grand moment that took place 10 years ago. KI has in the past held yearly events every August in partnership with Mazingira Institute to commemorate the anniversary of the 2010 constitution but this year due to the COVID-19 situation, KI proposes to mark the celebrations differently by engaging the people at the grassroots, who are most affected by non-implementation to get their views and opinions on how it has impacted their lives.

To mark the 10-year anniversary of the Constitution, KI will partner with Social Justice Centers and the Office of the High Commissioner for Human Rights to implement a series of activities which will be geared towards creating discussions that will build on civic awareness and highlight the gains and challenges of the 2010 constitution. The activities will include social media awareness campaigns through; webinars and tweet chats accompanied by posters, radio interviews at local radio stations-involving members of social justice centers and the public, community dialogue meetings with social justice centers to discuss the Constitution, particularly the bill of rights based on lived experiences, and distribution of literature resources on the 2010 constitution. The thematic focus of the activities will mainly be the bill of rights enshrined in the 2010 Constitution of Kenya, its implementation status and a scorecard gauging its performance against expectations. All these events will be covered through livestreams to reach as many people as possible.

Through this initiative, KI anticipates that the citizenry will be more engaged and informed on constitutional issues around the bill of rights and they will be able to see where we are as a country in terms of implementation even with the ongoing debates on changing the constitution and emerging issues such as the COVID-19 health crisis and its implications on the bill of rights. Through the discussions, recommendations could also be drawn which could be proposed to the government on how the bill of rights could be better implemented. The social media event and the community meetings at the social justice centers will target generally the public, partner CSOs who have mandates to work on various aspects of the bill of rights, members from community justice centers and where possible, members of independent state agencies tasked with implementation of various aspects of the bill of rights. The proposed commemoration activities will take place between July 27th and August 27th, 2020.