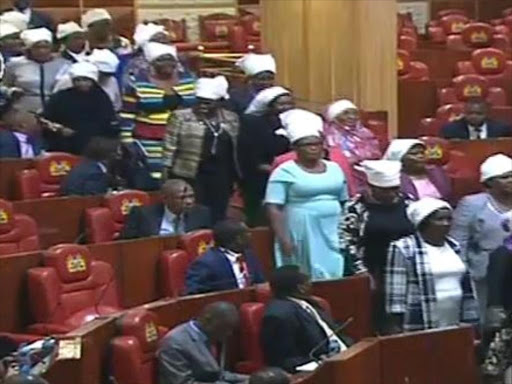 Where are we now over the rule that Parliament must have no more than two thirds of either gender?

The National Assembly is 42 women short of the number needed to achieve no more than two-thirds men, and the Senate just two short.

The Constitution requires a lot of laws for its implementation. For many, there is a specific deadline. Parliament could extend that deadline for any particular law by one year, just once, and only in “special circumstances”. They did this for many laws, and not usually in very special circumstances.

But what was to happen if they did not pass a law on time?

The Committee of Experts, preparing the final Constitution, said anyone could go to the High Court and ask for an order that the missing law be passed within a time specified in the court’s order.

The CoE’s real creativity came next. If Parliament did not pass the law, the Chief Justice must “advise” the President to dissolve Parliament, and the President must do so. This is the only situation in the Constitution in which Parliament could be dissolved early (before its term of, usually, five years was up) and a general election called.

This threat of being ‘sent home’ seemed really to worry parliamentarians, and to ensure that various new laws were passed, even if the quality of those laws was not always great.

Unsurprisingly, MPs had not been keen on this provision. When the Select Committee on the Constitution got its hands on the draft in 2010, it wanted the provision changed so that complaints about non-passing of laws went to the Speaker of the National Assembly – not the High Court. The Speaker was to direct the relevant parliamentary committee to take steps to cause a Bill to be published and tabled before Parliament. That was all. The Committee of Experts dug in its heels and kept its provision.

In 2012, the Supreme Court seized on Article 100, which provides that Parliament must, by August 2015, pass a law to promote the representation of women. The Supreme Court did not order Parliament to pass the law – it just said its ruling should be used by the High Court if someone applied for that order.

As we know, the law was not passed – by the deadline or later. So the Centre for Rights Education and Awareness did apply to the High Court, and in March 2017, Justice John Mativo ruled that the necessary law must be passed within 60 days from his judgment.

The Court of Appeal upheld Justice Mativo’s decision last year. It said: “It is a matter of public notoriety … that none of those constitutional Amendment Bills has ever been debated or considered by Parliament seriously; they have all been lost due to lack of quorum in the National Assembly. That, to us does not speak of a good faith effort to implement the gender principle and is precisely the kind of conduct that the people of Kenya wanted to avoid by writing into the Constitution Article 261.”

It added that anyone can now petition the Chief Justice to advise the President to dissolve Parliament.

In fact, I think Uasin Gishu MP Gladys Shollei is quite right to say that the Constitution does not say it is necessary to petition the Chief Justice. It assumes  the High Court’s order goes to Parliament and the Attorney General with a copy to the Chief Justice, and if nothing is done, the Chief Justice must “advise” the President to dissolve Parliament.

Clearly, the Chief Justice did not do that in 2017. If he had, what would the President have done? Nothing probably, if only because Parliament was already going to be dissolved on August 8 when the election was due – less than three months after Justice Mativo’s deadline.

The Law Society of Kenya has, however, now written to the Chief Justice; hence, his dilemma.

The 12th Parliament was elected because the 11th had come to the end of its life – not because it was sent home for failure to pass the two-thirds gender rule. If the 11th had been dissolved for that reason, the new Parliament would have had a new deadline.

The other dilemma that must worry the Chief Justice is that if he now “advises” the President to dissolve, and the President does dissolve, we shall get a 13th Parliament probably still without one-third women. And that Parliament would definitely have five years to pass the law – in other words,no deadline. So what, he must be asking himself, is the point of using this power?

Such a saga would also not improve the already very bad relations between the Chief Justice and the President.

WOULD THE PRESIDENT HAVE A CHOICE?

Could he say “I shall dissolve in August 2022”? Again surely No – because basically he would be doing nothing.

But it is very hard to deal with presidents who simply refuse to do what they are obliged to do. People who refuse to obey court orders commit a sort of crime – but our President cannot be taken to court for any crime, while he is President, that is (Article 143(1)). We have the same issue with the President’s failure to appoint 41 judges.

The election for President, governors and county assemblies is supposed to be on the same day as parliamentary elections. The day is also described as “the second Tuesday in August in every fifth year”.

The Constitution envisages presidential and parliamentary elections being on different days only if an early presidential election becomes necessary because a presidential vacancy arises when there is no Deputy President.

Suppose the President dissolved and there was an election in November this year. August in Parliament’s fifth year would be in 2025.

But this would be the eighth not the fifth year since the President, governors and county assemblies were elected. Do they get three extra years? Who among the voters would want that? Or would a 13th Parliament elected in November last only until August 2022? In which case a five-year deadline would be even more meaningless.

This difficult question, which cannot be fully explored here, would need a court decision. In 2017, the High Court held that MCAs’ elections must be on the same day as Parliament’s, even if this was not after five years for the ward reps. The dominant issue was that the constitutional design is that all elections should be on the same day.

How do we now achieve the Constitution’s objective of the equitable representation of women remains the real dilemma.