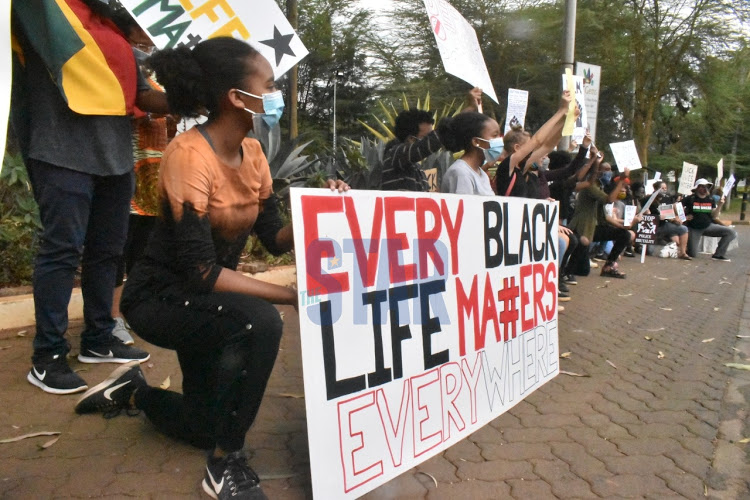 The slow suffocation and murder of George Floyd shocked the world.

It brought into stark relief the chronic terror that black Americans must feel when they encounter the police. Certainly, not every encounter will result in a knee on the neck or a death, but for black Americans, the fact that it could happen always lingers in the back of their minds. Uncertainty and chronic fear are, in themselves, dehumanising, cruel, and degrading.

George Floyd was buried this week following protests around the world. The police response in the US to these protests only caused more outrage, as videos showed officers assaulting old men, pulling down face masks to pepper spray faces more effectively, and using on protesters the same chokehold techniques that killed Floyd. It seems that the police have not learned: The blood on their hands only sparked more violence.

The United States deserves no end of criticism for its centuries-old war against black bodies. But, although it comes too late, some parts of the country are now re-examining the police state and trying to imagine a world in which policing is not inextricably tied to state-sanctioned violence.

The 2010 Constitution also imagines such a world. Articles 243 and 244 establish a National Police Service whose objects are to strive for the highest standards of professionalism, prevent corruption, practice transparency and accountability, and comply with constitutional standards of human rights and fundamental freedoms.

Two things stand out. First, the Constitution established the National Police Service, not a Force. The title says a lot. The police have been established to serve the community, not to use force to coerce the community into submitting to its will. Second, the objects and values do not include using force to compel compliance with the law. In fact, criminal conduct is mentioned only once, and it is corruption—and only corruption—that is singled out.

Kenya’s police forces have a violent origin story, like the United States’. As in the US, Kenya’s police force, established under colonial rule, was meant to protect the property of a few and maintain a white-supremacist order. As in the US, the police in Kenya were given broad, if tacit, authority to inflict violence, and did so arbitrarily and with a stomach-churning zeal. And, as in the US, the Kenyan police were given the authority to arrest and detain people based on the thinnest of justifications.

Under President Daniel Moi, Kenya’s police became the violent arm used to crush political dissent. Under President Mwai Kibaki, they were used to crush the Mungiki sect. They did not do so through investigation, arrest, and prosecution, but through state-sanctioned killings.

WE MUST CHANGE CULTURE

The 2010 Constitution recognised this and sought to change the normative foundation of police authority. The explicit focus on accountability, anti-corruption, professionalism, transparency, and service in Articles 243 and 244 is informed by the shameful past of Kenya’s police force.

Just as the policing culture in the US survived the civil rights movement of the 1960s, Kenya’s policing culture has stubbornly resisted the changes demanded by the Constitution. Kenyan police kill more people per capita each year than do the police in the US. Yet we seem inured to this violence: No matter how disturbing and painful, what is chronic often becomes mundane.

Politicians bear no shortage of blame for the chronic violence. As in the past, police violence is aided by lawmakers, who have authorised the use of firearms to protect property— a sanitised way of saying that a mobile phone is more important than a human life.

This is unconstitutional, and the Katiba Institute is challenging these rules. President Uhuru Kenyatta must also accept responsibility. He has pampered the police. When first elected, he pushed a law to increase security services’ powers. He got some of what he wanted, but thanks to interventions by civil society, the worst parts of the law were scrapped. Uhuru has occasionally chastised the police, but his inaction suggests that police violence does not really give him sleepless nights.

According to the Independent Policing Oversight Authority — established to enforce the norms of police service in a democratic society, including those set forth in Article 244 — the police have killed 15 people while enforcing the Covid-19 curfew.

The Social Justice Centres say they have lost count. One of them was James Mureithi, a homeless man, while Yassin Hussein Moyo, 13, was shot while he sat on his balcony. The curfew was implemented, ostensibly, to save lives. The police are using it to justify taking lives.

Astonishingly, Police spokesman Charles Owino blamed the public for police violence. He has taken a page from police apologists in America: Blame others for institutional failings and create a false sense that people deserve the violence inflicted on them.

But perhaps most disturbingly, Kenya’s police have assassins among their ranks who kill with impunity in the name of justice. Even when these assassins are exposed, the government does little to restrain the lawlessness. By paying, arming, and protecting killers, Kenya uses fear and intimidation to guard the interests of a few. This is unlawful and unconstitutional. It is, therefore, not surprising that Kenyans sometimes do not know who to fear more, the criminals or the police.

The Kenyan police, like those in the US, use fear and intimidation to convey real and implicit threats to life and then blame the public for the harm inflicted on them. At times, it is tempting to swallow this poisonous logic. Crime wears away at communities and for the most frustrated (and often the most in danger) police murders seem swift and effective. Yet, there is no room for moral ambiguity here. It is not for the police to decide who is guilty – that is the job of the justice system. Police investigate and elicit the evidence necessary to prosecute criminals; if that is strong enough the courts will convict.

A police killing is not justice, it is a sign that the police have failed to do their job. They have taken a life, precious under any circumstance, and in doing so have tacitly acknowledged that they are unable to do the job the right way. Kenyans must have the moral clarity to see through such arguments.

As in the US, transforming a police force into a police service — in reality not just in name — must be demanded by the people. We cannot rely on IPOA alone. It has done an admirable job but is shackled by funding shortages and institutional indifference.

The Constitution, however, establishes both the rationale and the mechanism for change. Article 238 emphasiSes that national security forces, including the police, must protect against internal threats to the people and to peace. Article 37 gives every person the right to peacefully demonstrate, protest, and petition the government. The police need to know that the people are not a threat to peace, and Kenyans, like Americans, must exercise their right to demand change.

Those who maintain authority through violence understand how effective peaceful protests can be. The police do not crack down on demonstrations to keep the peace but to maintain the status quo.

Despite the rights under Articles 33 (speech) and 37 and the protections of Article 238, demanding change is dangerous. Bloggers are being arrested. People are being killed because they are outside at the wrong time. Tear gas, beatings, and detention have become inseparable from protest.

Americans may have finally realised that they have no choice but to change. Kenyans, too, must demand what the Constitution requires: police that serve the people rather than terrorise them.

The author is Litigation manager at Katiba Institute. He acknowledges the assistance of Christine Nkonge, the executive director, and Board members Yash and Jill Ghai and Gabriel Dolan.

This Article was first published by the Star Newspaper on 13 June 2020.